Difference between revisions of "Hacktivists, The"

From Anarchivism
Jump to: navigation, search 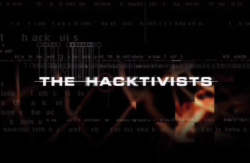 The Hacktivists is a one-hour documentary on cultural subversion in the digital age. Powerful new types of protest on the internet reveal an emerging movement that’s leaderless, global, anarchic and chaotic.

Electronic protests are designed to take capitalism offline; sit-ins are "virtual" and an "online attack" can send a company’s share price plummeting.

Across four continents, the four main characters in The Hacktivists are planning an online protest for A20, the Summit of the Americas meeting in Quebec City in April 2001.

Canadian Nart Villeneuve is taking a bus from Toronto to be the "eyes and ears" of the online protest via his laptop and cellphone. French codeslinger Renaud Courvoisier is offering up the latest version of his protest "drawing tool". Paul Mobbs and his Electrohippies are masterminding the whole operation from an old farmhouse in Wales.

But the "cybersleuth" is on their trail. With the upsurge in web-based activism has come internet intelligence agencies employed by big name companies. Ben Venzke is a man at the top of his profession. Proving his point are the Quebec police, who admit to shutting down their website during the Summit in fear of an attack. Says US defence analyst John Arquila, "Hacktivism works and it will work even better as time goes by."